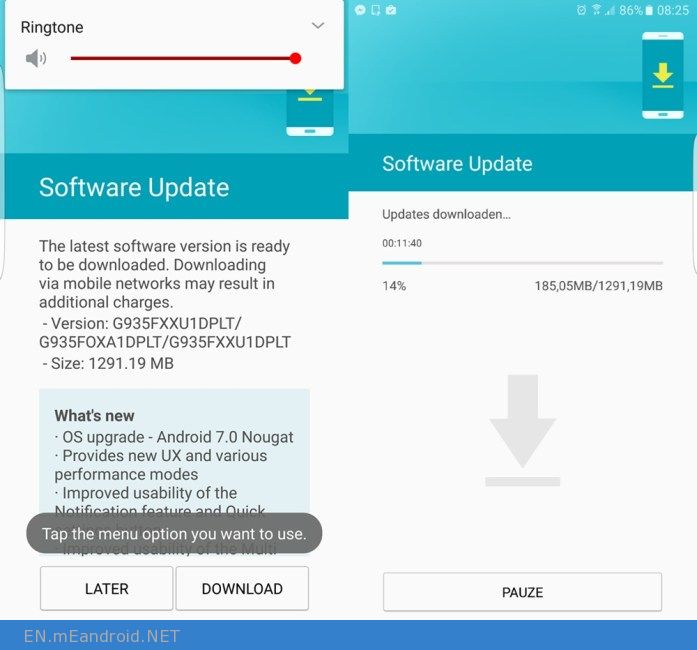 It is always recommended to update your device with the latest firmware whenever Samsung rolled out as with every update Samsung introduces fixes for bugs (if any), improve/enhance overall performance in OS and sometime introduces new features. Here at EN.mEandroid.NET, you’ll find both official and manual way to update this latest firmware on your  Galaxy S7 Edge .

Scroll through this page to learn how to install stock Android 7.0 Nougat update 2017firmware on Galaxy S7 Edge .

However, flashing or installing official firmware restore device kernel, so root access to your device will be void, means the firmware update will unroot your device (if it was rooted).

There are two official ways to update the Android 7.0 Nougat update 2017  firmware, OTA, and KIES. However, if you unable to update your device through OTA and Kies, then you can flash stock firmware manually through Odin. EN.mEandroid.NET always recommends you to try official ways (OTA or KIES) first and if official method doesn’t work then try manual method to flash the stock firmware.

The firmware is released only for the Galaxy S7 Edge  . So, don’t try this tutorial on any other Android device and also the tutorial is based on Windows PC. EN.mEandroid.NET is not responsible If anything wrong happens to your device after following this guide, try this at your own risk. However, we believe that if you follow the instructions carefully that mentioned in this guide, your device shouldn’t face any issue.

Before proceeding to update guide, EN.mEandroid.NET recommend to backup all your device data and settings to restore later when you need that. However, official firmware restores all previous data but if your device gets stuck at boot loop issue or fall into any error, the backup file will help you to restore all your data.

How to Install/Update Official  Galaxy S7 Edge Android 7.0 Nougat update 2017 on via OTA:

If both the above official way don’t work for you, then download the firmware from the below list and follow the manual installation guide as it is.

Note: We’re mentioning the latest firmwares added to this page in the list below. Please find the download links for these firmwares in the relevant section below.

Update [January 17, 2017]: Stable Nougat OTA update for Galaxy S7 Edge users, whether those who participated in the Nougat beta program or not, has been released today by Samsung. It comes as build G935FXXU1DPLT for the S7 Edge, and is now available for download for both UK and Czech Republic. Check out the downloads section below.

Update [November 10, 2016]: Build no. of Android 7.0 Nougat firmware for the AT&T, Verizon, Sprint and T-Mobile is already out on the web while there are no signs of imminent release just yet. Samsung released the Nougat beta yesterday for Korean Galaxy S7, but a Nougat beta firmware leaked out for the global varaint of Global Galaxy S7 and S7 Edge too, the relevant one added below too. Find the new build no. in the relevant carrier section below, but don’t expect these to release any soon, in fact, not within a month. Maybe by December end, we will have the Android 7.0 build out for Sprint Galaxy S7 Edge, and perhaps Verizon too.

Update [November 09, 2016]: Samsung released the Galaxy S7 Edge Nougat update as beta earlier today, and while it went live in Korea right away, we’re still waiting for the update for other Asian and European regions, and other models than G930K. But we know that the Nougat firmware will be G935FXXU1ZPK4 build. So, hang on while we try to get our hands on the PK4 Android 7.0 build for your S7 Edge, and keep checking this page repeatedly in the meantime. UPDATE: You can NOW download the G935FXXU1ZPK4 firmware, without need of password.

The AT&T G935U firmware is confirmed to be working alright on regular locked Galaxy S7 Edge. Installing the G935U firmware on regular G935A device means all the AT&T apps and stuff are removed from the device, while Samsung’s such bloatware stuff can uninstalled to except for some 4 apps such Samsung Pay, Samsung Apps store, etc. Which is okay.

If you face any difficulty with Odin, do let us know.

Model no. SM-G935U (UNLOCKED Edition for each US carrier)

If anything goes wrong, your device may stick at booting animation.

If your Galaxy S7 Edge stuck at boot animation screen for more than 10 minutes, then follow these instructions.

How to use QPST Tool